After you tag an asset with concepts, or if your asset is already aligned to any standards, then you should load the related standards found by the alignment system.

To see the standards matches from the Align Assets By Concept page, click Load Standards NOW. (Select "Always load standards without prompting" if you want these to load automatically in the future.)

The "Standards Matches" section displays the standards that are connected to the concepts tagged or to standards you may have already have "Accepted." 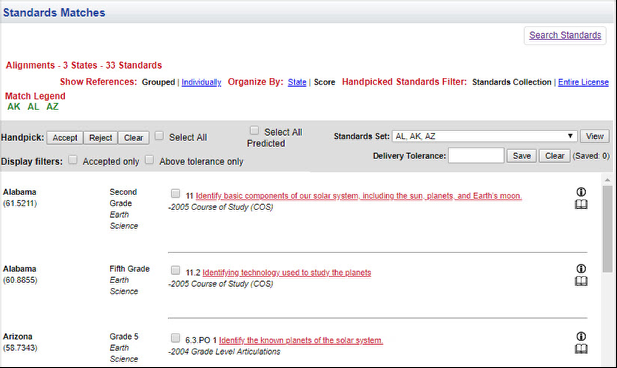 When reviewing the standards you will notice the following:

Click on the “i” icon to see the "Standards Hierarchy" - upper level of the standards document.

After you click Load Standards NOW, the font color of the standards found by the system are red. These "red text" standards are the ones that the system generated based on your concept profile. It is now your task to make decisions about whether these standards match the requirements of the project.

You can clear a decision made to include or reject, select the standard and click Clear. This returns the standard to its original state in red.

To select multiple standards at the same time, you can use the "Select All" and "Selected All Predicted" boxes.

There are a variety of options for organizing and filtering your standards matches. They are located at the top of the section.

Because some states have adopted or produced similar versions of Common Core and NGSS, some standards can be grouped together if they cover similar skills. This allows you to select all the standards in a group at once, making the alignment work more efficient. "Grouped" is selected by default.

When "Grouped" is selected, standards that cover the same skill are then called out as having a "Multiple Reference." For example, in the following image, 10 documents each have a standard covering the same skill.

To select all the standards in the group, click the outer box, which auto-checks the boxes for all standards grouped together.

If you want to look at the standards individually within the group, you can click the Show All, which you can see in blue below.

Organize By: State or Score

By default, the list of standards is sorted by "Score" (weight), showing first the standards that most closely match to your concept criteria.

To sort the list in alphabetical order by state, click "State." When grouped by state, any grouped Multiple Reference standards are listed first.

These options are related to the documents/authorities that are presented in the standards matches. The default for an assignment or project is always "Standards Collection." This forces the list of standards matches to include only the set list of documents specified for a project. If you were to click "Entire License," you would see standards from every authority and document included in your license.

The "Standards Set" limits which states or authorities you can see. "Default Set" includes the specific document list for the project. If, however, you you need to switch between multiple standards collections for a project or you only want to view a single state at a time, you can use the drop down menu to change the authorities you see. In the image below, you'll see "Custom Sets" with a list under it as well as "Individual States." The "Custom Sets" are specific Standards Collections, and the "Individual States" are the individual authorities. To change your view, make a selection and then click View.

The Delivery Tolerance field allows you to limit the list of predicted standards according to their weight. You can set a tolerance and also check the "Above tolerance only" option to filter the list of standards to only those whose weight is above the tolerance.

For example, with the Delivery Tolerance set to 70 and "Above tolerance only" checked, you only see standards whose weight is above 70.0. 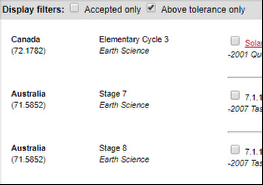 If you check "Accepted only", you see only standards that you have accepted.

If you are aligning a project that uses V2 Alignment (an older alignment system), the process is similar but the buttons are Include and Exclude and results are presented on tabs. For more information, refer to Aligning by an Older Alignment System.